on October 14 | in English | by laurakuchenbecker | with No Comments

At the Gillamooswiese in the Bavarian town of Abensberg (D), the tax official Oliver Strümpfel succeeded in his second attempt to raise the official world record mark in beer stein carrying to 29 steins.

The beer steins filled with beer up to the calibration mark are picked up with the hands in this record category. Additional layers of filled mugs may be stacked on top of these steins by a helper. Then the beer steins must be carried a distance of 40 meters before again being placed on a table at the finish line. The problem with record attempts, however, is often that a maximum of 10% beer may be spilled on the route in order for the beer steins to count towards the record.

The actual record holder likes to improve the record

When the record was attempted on September 3, 2017, Oliver Strümpfel himself was the official reigning world record holder, having set his best mark in September 2014 with 25 jugs in a ZDF TV show. Since then, there have been numerous world record attempts, but none of them has been officially verified so far. That’s why RID record adjudicator Olaf Kuchenbecker had checked Strümpfel’s attempt in this most Bavarian of all world record disciplines directly on site to establish beyond doubt the number of steins carried over the 40-meter distance in accordance with the rules. 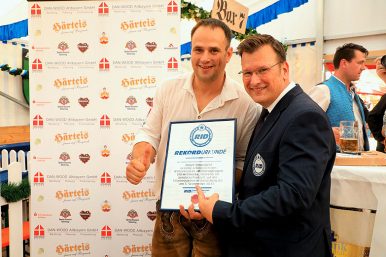 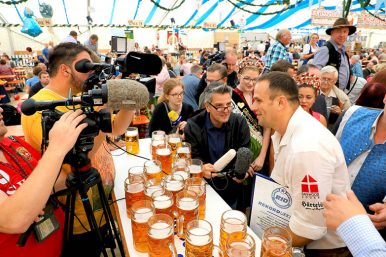 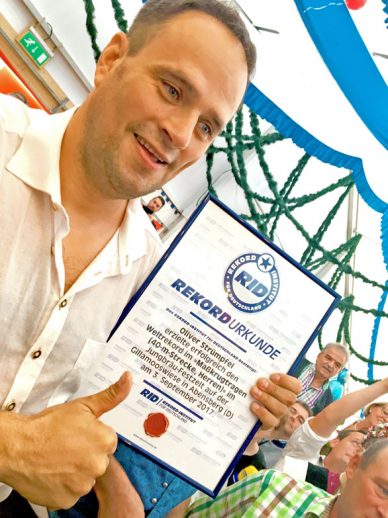 In order to successfully break the world record in this discipline, it is equally a matter of strength and skill. After all, the 31 filled beer steins that record-breaker Oliver Strümpfel carried in his second successful world record attempt add up to over 71 kg in weight. We remember, a maximum of 10% liquid loss is allowed when carrying. One can imagine how difficult the world record task is for the record aspirant. And indeed, one beer stein had been dropped shortly before he reached the finish line, and the filling quantity of another one was too small.

With 29 beer steins as the final score, Oliver Strümpfel has once again secured the official world record in »beer stein carrying (40 m distance, men)«. Even if he is personally dissatisfied, since he wanted to be successful with 30 steins, it will probably be difficult for subsequent record hunters to top the 29 once again.