Franz Müllner, strongman and multiple RID record holder has a burning passion for extreme performances. »The Austrian Rock« already holds numerous world records that surpass themselves in their outrageousness; for example, he turned a Ferris wheel with pure muscle power (November 2019) or held the rope during a wheelchair bungee jump with his bare hands (September 2020). The strongman is literally on fire for new world records as he proved on September 18, 2021, when he set the official »longest time in the jet of a running dragster turbine (max. 20 meters)«.

In a blast furnace suit to the world record

With the turbine switched off, dragster pilot Gerd Habermann’s old yellow school bus looks quite harmless. But appearances are deceptive. Soon it should become hot on this September 18, 2021, on the grounds of the Technik Museum in Speyer (D). There, »Kraftlackl« Müllner is getting ready to brave the flaming 1,600 degrees of the dragster turbine. The fact that sausages were last grilled in its jet of flame in 2020 does not worry him; a fireproof blast furnace suit protects him against this. Nevertheless, the upcoming world record attempt will not be a walk in the park – not even for extreme athletes. The Austrian already faced the flames of a dragster turbine in 2015. Now, another world record should be achieved in the flaming tail of the bus.

Also in protective clothing, Gerd Habermann takes a seat in his dragster bus, whereas Müllner takes up position behind it, at the end of a ladder bolted firmly to the ground. The turbine starts with a roar, first smoke, then flames shoot out of the bus, which is open at the back. Müllner fights his way up his ladder in a jet of flame. His time is limited not only by the heat, but he also quickly runs out of breathable air. An oxygen device would explode in the fire and is therefore not available. How long can »The Austrian Rock« withstand the heat? 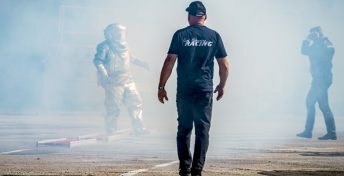 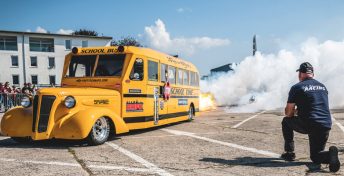 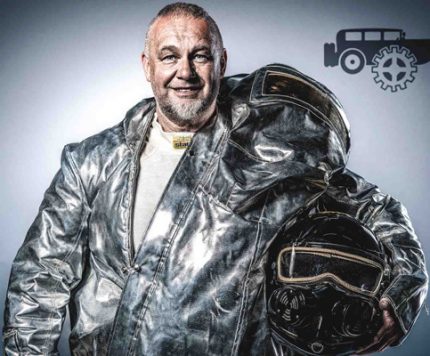 Against the jet of fire – long enough for success?

Step by step, Müllner approaches the turbine until he waves his arms at 17.33 meters: Abort. Habermann immediately switches off the drive. How long did Müllner stand in the flaming jet? The answer: Franz Müllner withstood the fiery tail for 19 seconds, thus winning the world record for the »longest time in the jet of a running dragster turbine (max. 20 meters)«. Another brand new world record in the extreme sportsman’s list.

Pin It
» English » WORLD RECORD IN THE SPEYER FLAME JET