RUNNING TRACK EXTREME ON THE GROUND

Dirk Leonhardt from Bruchköbel (D) is an extreme athlete through and through and absolutely ambitious as RID record breaker. After already having travelled to the most countries by bike in 7 days and accomplished the longest non-stop team stair run together with Judith Gebkea Strich, Dirk wanted to achieve his third world record of the year 2021. For that, the ultra-athlete was going to try the world record category »fastest 100-metre run under water«.

Weights for traction on the ground

Running under water is technically very demanding. The resistance in the water is significantly greater than in the air, and an underwater runner also has to fight against natural buoyancy. Therefore, Dirk Leonhardt had to prepare well and equip himself with special diving equipment and weights to go underwater on 21 August 2021 in the Heinrich Fischer pool in Hanau (D). Complicating matters further was, according to the rules, that the record breaker must always have one foot on the ground, swimming is of course not allowed. So Dirk needed a special running technique. But as an experienced record breaker, he is no stranger to such problems.

To set the new world record, the athlete had to complete his run in a maximum of 3 minutes. Leonhardt tried to do this with sports shoes, which he hoped would give him good traction. The correct technique was checked by a safety diver from DLRG and two documentation divers.

Top time for the world record

Dirk needed 2 minutes 50 seconds for this run – world record achieved, or not? For the ambitious underwater runner, this time was not fast enough. So, Dirk Leonhardt took off his shoes and went back to the bottom of the 50-metre pool. In fact, the ultra-athlete was able to improve the time. 2 minutes 37 seconds were now on the clock, but still – he went back in. Was a fabulous time possible? 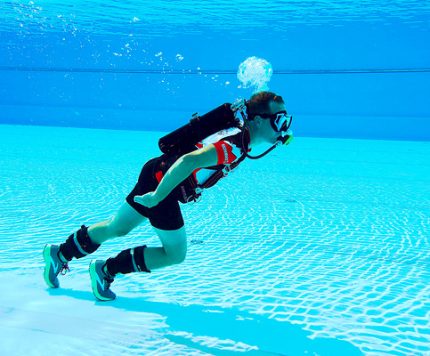 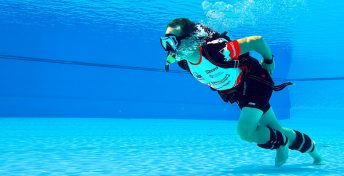 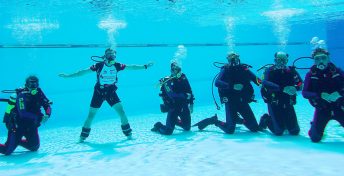 With his third attempt, Dirk Leonhardt was finally satisfied. This time the record aspirant needed only 2:20.11 minutes to cross the pool twice. With this time, Leonhardt achieved the official world record for the »fastest 100-metre run under water«. On top, he also managed to achieve his personal goal.

Pin It
» English » RUNNING TRACK EXTREME ON THE GROUND