Splashy and spectacular: At the RID record event on 10 November 2022 in Hamburg (D), RID record holders Jens Gaude and Muhamed Kahrimanovic gave their best to set new records. Kahrimanovic might already be known to record fans as »hammer hand«, since he smashes coconuts and other hard objects with his hand. His long-time friend Jens Gaude is also active in fracture contests, but is trained to do so with his elbow.

The martial artist was already successful with this »sports equipment« in 2020. Back then he smashed coconuts, while now he wanted to flatten drink cans. To succeed in the record category »most drink cans smashed with the elbow in one minute«, precision and stamina is needed. Only when every elbow smash hit perfectly, the record breaker will be able to improve the current world record. This is the 84 cans that Edin Kajevic crushed in 2017. In addition to this tight benchmark low temperatures complicates preparations.

To prevent the cans from rolling away whilst being smashed, they are placed on a concrete beam and fixed with double-sided adhesive tape. Due to the cold, damp air, however, it did not stick.

Will the »iron elbow« succeed?

Nevertheless, record aspirant Jens Gaude and his helpers succeeded in the end in preventing the cans from rolling away. The record attempt was about to start. RID record adjudicator Olaf Kuchenbecker checked the cans beforehand to check wether they were intact. At the beginning of the long line of beverage cans, the record hunter prepared himself to smash his declared personal goal of 100 cans – 85 would be enough to improve the world record. After the starting signal, Jens Gaude demonstrated his iron elbow and flattened one can after the other, whilst spectators and media representatives quickly moved out of the »splash zone«. 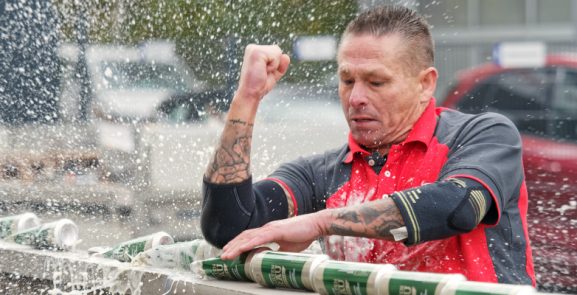 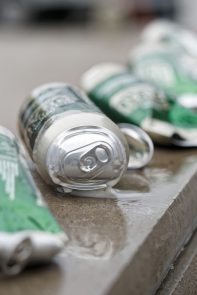 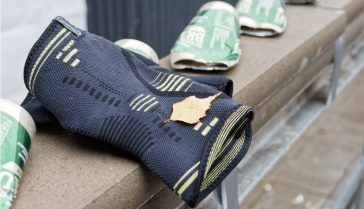 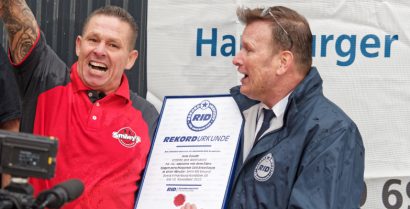 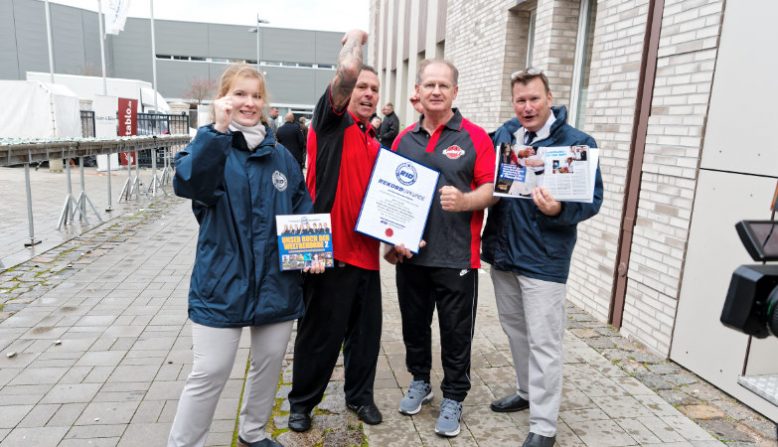 Exactly 60 seconds later, the record attempt ended and Kuchenbecker counted the flattended cans. With a total of 113 completely crushed cans he certified the new world record for the »most drink cans smashed with the elbow in one minute« and awarded Jens Gaude with his well-deserved RID record certificate.

« GERMAN DRUMMER HAS THE TORQUE DOUBLE TRIUMPH FOR HAMMER HAND »