GERMAN DRUMMER HAS THE TORQUE

To succeed in this record category, you literally have to master the drums. The »most drumstick spins in one minute« is about spinning the drumsticks around your fingers as often as possible within the time frame – while performing a song. Drummer Sebastian Runde aka Bastian Gregor succeeded in this exciting musical feat, for which he was awarded a RID record certificate at »Weinland Waterfront« in Hamburg (D) on 23 May 2022.

Bastian Gregor, already booked as drummer for local German music icons like Nino de Angelo, Truckstop or Torfrock, developed this world record idea for his rock-a-billy band »Biggs B Sonic«. The specialty of »Biggs B Sonic« are rock covers in rock-a-billy style with »some acrobatics on bass and drums«. Fittingly, Gregor chose the song »Mystery Train« by the »King of Rock ‘n’ Roll« Elvis Presley for his world record attempt. 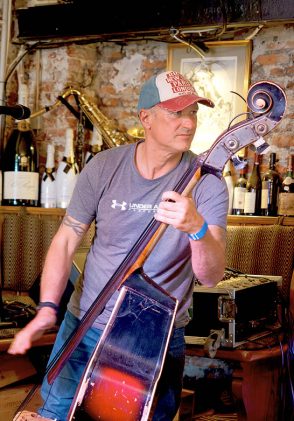 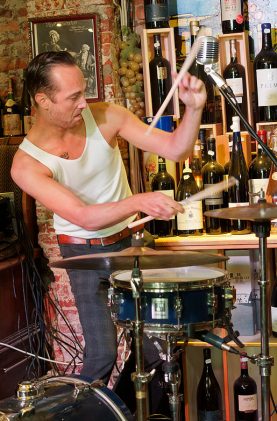 Important for a record to be valid is not only the skill in performing the 360 degree drumstick rotations around the fingers. The contestant must do a musical performance at the same time. In this case Bastian had sent in video clips of his performance to get it reviewed by RID. For this purpose it had been slowed down for exact counting. Accordingly Bastian Gregor managed to perform 105 spins of his drumsticks in 60 seconds. Successfully enough to set the first record in this category!

On 23 May 2022 the new world record was officially certified and awarded with a RID record certificate. RID record adjudicator Olaf Kuchenbecker, himself an active bass player, came to »Weinland Waterfront« at the Elbe river to meet media representatives and invited guests. 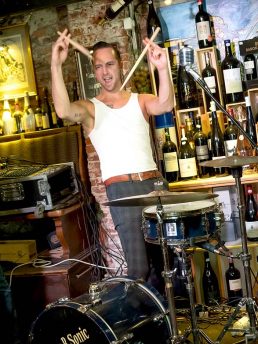 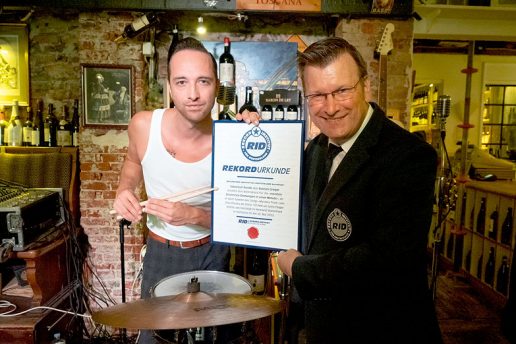 After a magician had warmed up the audience, »Biggs B Sonic« played two songs from their set list. As second song the chose their world record song »Mystery Train« – Bastian Gregor gave his best to demonstrate his drumming skills. The newly appointed world record holder received then his RID record certificate for 105 performed spins – new world record for the »most drumstick spins in one minute«.

Pin It
» Nicht kategorisiert » GERMAN DRUMMER HAS THE TORQUE