Splashy and spectacular: At the RID record event on 10 November 2022 in Hamburg (D), RID record holders Jens Gaude and Muhamed Kahrimanovic gave their best to set new records. Kahrimanovic might already be known to record fans as »hammer hand«, since he smashes coconuts and other hard objects with his hand. His long-time friend Jens Gaude is also active in fracture contests, but is trained to do so with his elbow.

The »hammer hand« wanted to strike twice that day, to set new world records. The special highlight: Kahrimanovic held a raw chicken egg in his striking hand. The egg must not break during the record attempt, whereas the martial artist can either smash coconuts or flatten drink cans. It’s all about body control and strength in equal amounts. Kahrimanovic’s first task that day was to smash 66 coconuts in a neat row. He has to smash at least 45 of them to secure the first world record in this category. 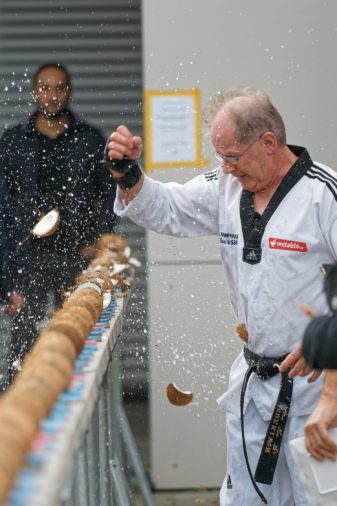 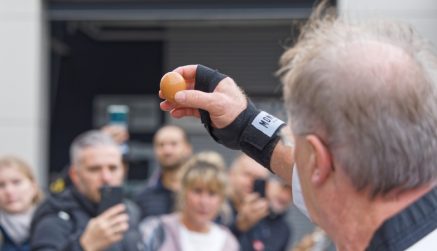 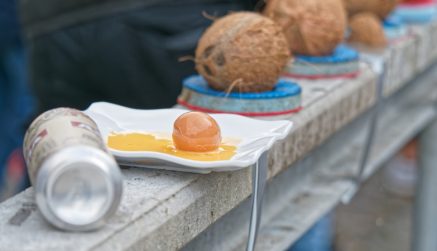 RID record adjudicator Laura Kuchenbecker was on site and first checked the coconuts. Only intact nuts are allowed to be used in the record attempt. At the starting signal, Hammerhand began to live up to its name. One coconut after the other burst. When the time was up, Kahrimanovic presented the chicken egg – completely intact! Then the record adjudicator counted 59 coconuts smashed according to the rules and certified the new world record for »most coconuts smashed in 30 seconds with raw chicken egg in the hammer hand«.

However, the experienced record-breaker only basked in the glory of acquaintances, friends and attending media for a short while, before he started his second challenge. For »most beverage cans smashed in 30 seconds with raw chicken egg in the striking hand«, he had to smash at least 53 cans to bring the world record from India to Germany. 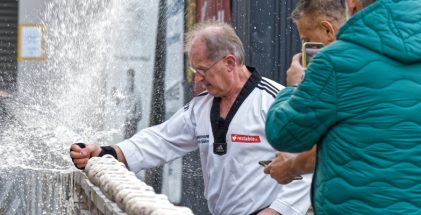 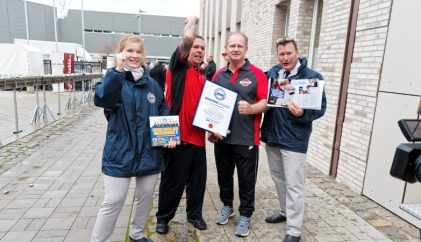 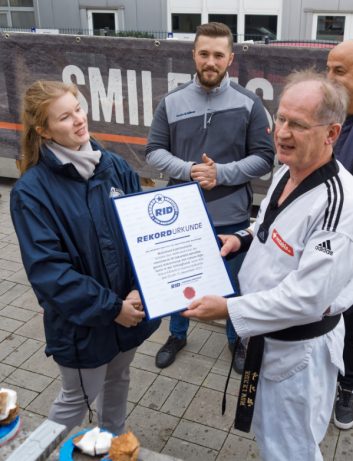 Again, the fracture test objects were checked to make sure they were intact before the start. The record hunter sprayed out one can content after the other – the spectators immediately took cover.

When the time was up, the record adjudicator checked the chicken egg and counted the destroyed cans. Muhamed Kahrimanovic was also successful in this discipline. With 63 cans, Laura Kuchenbecker confirmed the new world record for »most drink cans smashed in 30 seconds with raw chicken egg in the striking hand« and awarded the newly crowned record holder with RID record certificates.

Kahrimanovic clearly demonstrated that he does not achieve his goals with brute force, but with precision and technique.