on November 20 | in REKORDE, SPORT, SPIELE & ZEITVERTREIB | by RID_admin | with No Comments

In his homeland Bosnia and Herzegowina Taekwondo grandmaster Muhamed Kahrimanovic aka »Hammerhand« is very well known. Quite often he returns from his actual hometown Hamburg, Germany to show his skills in martial arts demonstrations, or to serve as record adjudicator for the RID Records Institute of Germany. So he did on 20th November 2017 in Tuszla, where a record event was held, filmed and broadcasted by local Pink TV.

The 13 years old Irma Nokto started the event with her attempt for the »most balloons hanging above the head burst with high-heeled-kicks in one minute«. Irma broke indeed the existing world record with the 39 balloons she managed to burst with the nail glued to the heel of her shoe.

The next record was achieved by Irmas father, martial arts specialist Mirsad Nokto for the »fastest time to break 16 concrete blocks on the stomach of a person«. Mirsad’s assistant needed only 4.22 seconds to shatter the blocks with a sledgehammer on Mirsad’s body completely. With this feat he bettered the world record formerly held by Ali Bahçetepe with 4.75 seconds.

Finally Zarko Jankovic from Montenegro tried to achieve the world record for the »most concrete blocks broken consecutively by elbow while holding a raw egg in the hand«. Zarko managed to break 82 blocks by hand without breaking the raw egg held in the same hand. Enough to break the previous world record of 76 blocks set in March 2017 by Ado Dulas from Austria. 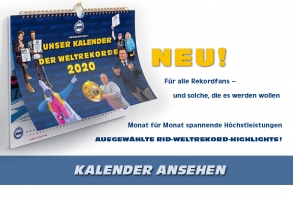