Delaying the start of heavy machines belongs to the standard repertoire of power athletes. In such duels »man against machine«, engine-driven vehicles are prevented from driving away or starting – with pure muscle power. Strongman Franz Müllner aka »The Austrian Rock« from Salzburg (A) prevented on 4 September 2022 in an official world record attempt in Bree (B) not only one vehicle from driving away, but even four at one time.

For the record »longest duration restraining four motorbikes« the contestant has to lie on his back while a motorbike is attached to each of his four limbs. Then the riders of the machines give full throttle and rev up the engines. The latter now tries to hold the four vehicles as long as possible and hinder them from driving away. Not an easy task, even for the experienced strongman and multiple RID record holder Franz Müllner. »The Austrian Rock«, as he is also known, stated beforehand that it would probably be painful. So the record attempt was all about perseverance and proving that Müllner indeed has muscles made of rock.

Will the world record attempt be a success?

At the event of his sponsor »RTCB Know-How in Oil« on 4 September 2022 Franz Müllner got ready for his test of strength in front of numerous spectators. Helpers were on hand at each motorbike and at the challenger to stop the riders immediately if necessary. With the starting signal, the motorcyclists gave full throttle. Their machines were racing motorbikes with four-cylinder engines producing around 220 hp. Shortly after the start, the power machines were smoking like crazy, while being prevented from driving away. 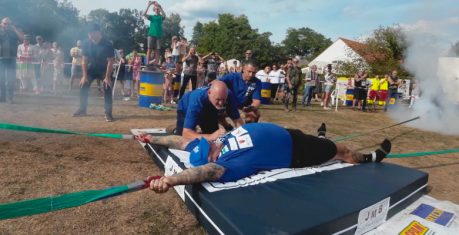 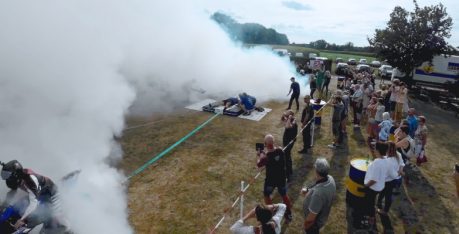 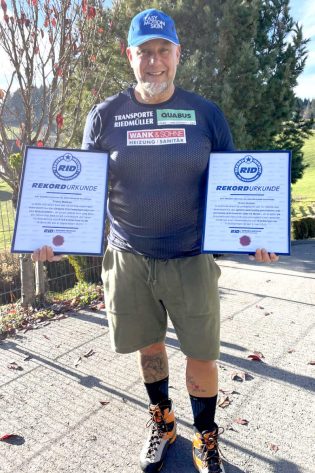 The extreme strength athlete did not let himself be put off by this. At the end he held the four motorbikes for the duration of 46.50 seconds and prevented them successfully from driving away. With that time, the Record-Institute for Germany (RID) certified the new world record for the »longest duration restraining four motorbikes« after having checked the documents.
Pin It
» English » STRONGMAN DEFEATS MOTORBIKES