Foosball is more than just a pub sport! This is the philosophy of the »Komm Kickern« initiative consisting of Silpion IT-Solutions GmbH, the German Table Football Association (DTFB) and Kickertool. With an internationally focused decentralized event, the initiators wanted to bring together numerous table soccer enthusiasts from all over the world and also increase the level of awareness for foosball. At the end of the event, which took place on 26/27 August 2021, it was evident that table soccer is able to set a world record.

The event was not only for connecting foosball fans. Setting a joint world record with all participants was an important additional aim of the event. The record category for »most participants playing table soccer at multiple venues (24 hrs)« is for as many people as possible to complete a table football game during the event period. Table football enthusiasts worldwide were able to participate under best practice Corona hygiene conditions, as participation was registered, listed and counted decentral via the »Komm Kickern« app. In this way, it was possible to organize the world record attempt across the entire globe. In addition to Germany, table football matches took place in Russia, USA, India, Switzerland, Austria, Vietnam, Spain, Japan, China, New Zealand and many other countries. The world record attempt was accompanied by long preparations: The initiators worked on the development of the app for over two years. In addition, a so-called »Kickerbus« had been travelling through Germany for months acquiring players. The patron of the event was Andy Grote, the senator (called ministers elsewhere) of the Interior and Sports of the Free and Hanseatic City of Hamburg.

Shortly after the start on 26 August 2021, the minimum required for setting the new world record was reached with 200 players at at least 50 different venues.

Final in Hamburg: How high can the world record mark be set?

At 8pm, the world record score was final. With 1,905 participants at 166 different locations worldwide, the initiators achieved the RID world record for the »most participants playing table soccer at multiple venues (24 hrs)«. 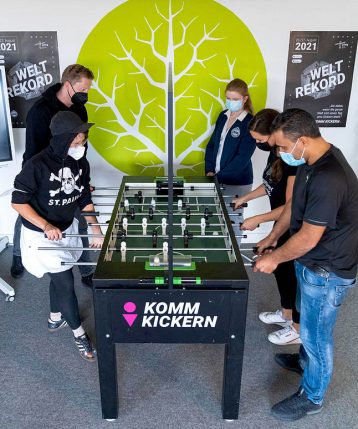 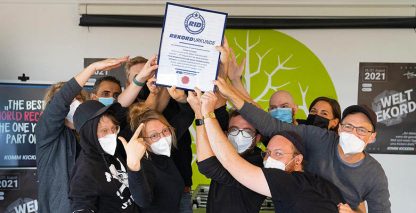 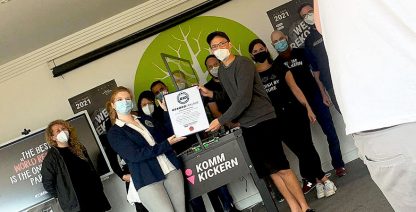 The new world record was officially certified by RID adjudicator Laura Kuchenbecker with the presentation of the RID world record certificate on 27 August 2021 at the Silpion headquarters in Hamburg. Even though it was pointed out beforehand that the team’s motivation was not solely dependent on achieving the RID world record, their joy was immense. However, igniting enthusiasm for the sport also seems to have been deemed successful in view of the worldwide participation.