Having started in spring 2020 with the hashtag »Corona-Special«, the small idea soon developed into a worldwide movement. After the successful world record for the »largest virtually playing music ensemble«, organiser Jens Illemann from Wewelsfleth, northern Germany was far away from finishing making music together. Since the start his online orchestra developed into recording virtually played songs on a monthly basis. For EuropeDay, 9 May 2021, their aim is to set another world record and exceed the number of 1,320 musicians from 2020.

The world record should be improved on EuropeDay, 9 May 2021

On 9 May 1950, the French Foreign Minister Robert Schuman had given a speech in Paris in which he outlined his vision for a new kind of political cooperation in Europe, thus laying the foundation for today’s European Union. Europe Day is a reminder of the values of peace and unity by which we now live together in Europe. Accordingly, the world record attempt was meant to visualise that best achievements can only be reached together. On behalf of the EU Commission, music teacher Illemann called musicians to participate in the world record attempt with a musical contribution. He had created an arrangement of the European anthem, Beethoven’s »Ode To Joy», especially for EuropeDay. In a crossover of classical music, swing and rock, it offers numerous instruments the opportunity to participate. Whether strings, woodwinds, brass, percussion, guitar or vocals – everyone could join in.

Are there enough contributions to improve the current world record?

Numerous music lovers from Germany, Europe and all over the world responded to this call during the campaign period from 1 – 27 April 2021. Spread across 24 instrumental genres, record contenders from 43 countries played the voices provided by Illemann on their respective instruments and sent him the videos they had recorded. As a »virtual conductor«, Illemann assembled the individual contributions into a musical work of art, which was published as video clip on 9 May 2021. In the run-up to the event, the Record Institute for Germany (RID) verified the number of participants and compliance with the record rules. Thus, RID record adjudicator Olaf Kuchenbecker was able to certify the improved world record for the »largest virtually playing musical ensemble« already in the video and awarded it with the virtual presentation of a world record certificate. A total of 1,360 musicians from 43 countries took part in the new musical achievement and in this way demonstrated their solidarity across all national borders. 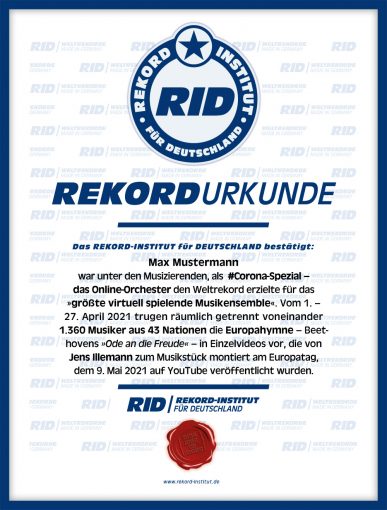 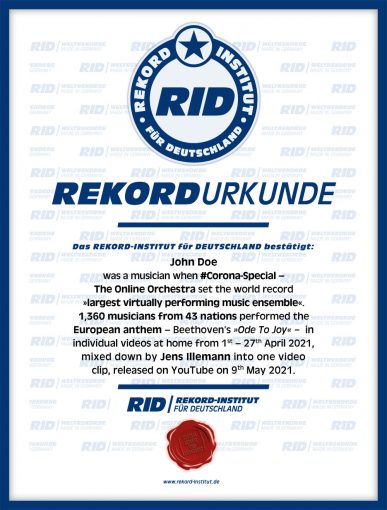 The following variants are available to choose from: